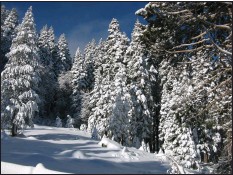 A gorgeous Thanksgiving holiday weekend is in the forecast for Mammoth and it will likely be followed by a multi-day series of light-to-moderate winter storms that will end November and start off December, forecasters said this week. The incoming storms will not be as big as the recent winter storms that dumped almost seven feet of snow on the top of Mammoth Mountain but they will add at least another few feet of snow to the highest peaks of the Sierra crest, said Mammoth forecaster Howard Sheckter. “What is coming next it is that the end of the week and into next week will be wet for California, but not as strongly as... the last time (last set of storms) so there is not as much confidence... for the wettest outcome,” he said this week. Some models show one to two feet of snow, others show five to six feet of snow beginning late this weekend which, he said, makes him lean into a blend of both models, or some two-to-four feet of new snow at the highest elevations of the Sierra. “I think we will get into an active pattern at the end of the week at the latest, but it might not really get going until next Tuesday Wednesday, but starting off with a smaller storm this coming Sunday and into Monday,” he said. “During this series of storms, we could see four or five smaller storms; perhaps a small one Saturday, then a colder one Sunday into Monday, then the biggest storm Tuesday into Wednesday. But it’s too soon to know for sure the exact details; I would just call it an active pattern and not touch the overall snow totals yet with a ten-foot pole! It’s too soon to do that. Then, after that, I think we will dry out... and maybe we will get another storm around the Christmas season... but I do worry that it will dry out again in January.” The National Weather Service office in Reno backed Sheckter up for the short term forecast, saying the end of the week and the beginning of next week is going to deliver a series of winter storms that could impact travel: “The upcoming holiday weekend could see an increased chance for a more active weather pattern that could carry forward into early next week,” they said. “While models still show... heightened uncertainty with regards to precipitation timing and quantity, as it looks now, guidance projects a trend in both increased winds and precipitation beginning Sunday that continues into early next week. With the increased chance for unsettled weather conditions and possible travel delays over mountain passes, it is advised to check the forecast as often as necessary for safer holiday travel.” Will this epic three-year La Nina-fueled drought ever end? Maybe next spring and summer, said forecaster Daniel Swain, a climate scientist with the Institute of the Environment and Sustainability at the University of California, Los Angeles and who holds concurrent appointments as a Research Fellow in the Capacity Center for Climate and Weather Extremes at the National Center for Atmospheric Research. “Long story short: La Niña’s still chugging along in the eastern tropical Pacific Ocean, and the tropical West Pacific’s still really warm,” he said on Nov. 21. “That’s a pattern that... favors the persistence of Northeastern Pacific ridging during winter – and this winter will likely be no exception. The exact placement of that ridge axis dictates whether California ends up warm and dry near the central ridge axis, or cool and relatively wet just far enough east of the ridge axis to see frequent cold storms diving southward from the Gulf of Alaska and western Canada. Right now, the seasonal models continue to suggest that the ridge is likely to set up in a position that keeps most or all of California – along with much of the Lower Colorado River basin – drier than average during the December to March peak of the rainy season, and into the spring thereafter. This is true of both the American and international seasonal model suites at this time (including the European model), so there is relatively higher confidence that this outcome will come to fruition (despite a pretty decent start to the season through mid-november in many of the same areas). So, I don’t expect recent performance to be a predictor of future conditions this winter across California, in all likelihood. “(That said)... for a couple of reasons, I’m willing to entertain some preliminary discussion of what might come after this winter/spring,” he said. “I think there’s a pretty good chance of El Niño making a long-awaited return in 2023. First, from a basic theoretical/physical perspective: the Pacific Ocean system has spent an awful lot of time in a persistent La Niña state over the past decade (including three consecutive La Niña years as of 2022 – a very rare event historically). A whole lot of anomalously warm water has been subducted into the ocean subsurface in the West Pacific, and eventually some of that is going to reemerge when trade winds slacken and that water mass sloshes eastward. And there is now also some dynamical model support for this: several flagship global models are predicting the rapid emergence of El Niño during late spring and summer 2023. I would even go out on a limb and say that there’s probably a higher than usual chance of a moderate-to-strong El Niño event by next autumn (but that is, decidedly, a shaky limb). It’s still far too early to discuss details, or potential impacts – I’m merely offering some informal thoughts here. But it also serves as a reminder that the very dry conditions that much of California has become accustomed to in recent years won’t persist forever.” More snow is on the way for Mammoth next week.